Lake Chapala may just be paradise for those who enjoy dining out and eating wonderful, creative food. This guide to our favorite restaurants is just that - our very own favorites. We have ranked them according to their menu selections, service, ambiance and price and have personally eaten at them all, sometimes more than once. If you think we have left out a really good restaurant, it is probably because we haven't eaten there yet. Let us know and we will make a visit and add our review to this guide. Buen Provecho!

Directions: From Walmart, travel west through Ajijic about 1 1/2 miles. Perry's is on the right at the top of the hill before the rumble strips as you are leaving Ajijic. The restaurant is located in a colorful building with an outdoor dining area and parking in front. 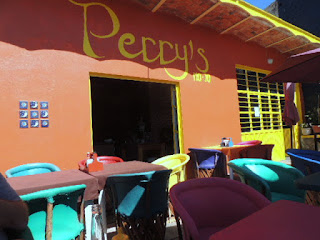 Perry's is a restaurant in search of an identity, changing shapes and definitions about as often as I change my clothes. First came Perry's Fish and Chips Shop, located in a tiny storefront in the village of Ajijic. Then, a wood-fired pizza oven was installed and a variety of pizzas added to the menu. Suddenly, Perry's added daily breakfast service. Tomorrow, who knows what new shape Perry's will take. 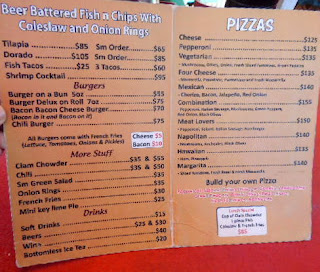 The limited parking and dining areas in their former location hampered growth. The new location, along the Carretera west of Ajijc is a welcome change for Perry's loyal customers. The newest location offers outdoor seating, bright, umbrella shaded tables crowded onto a wide front porch. There are a few indoor tables and adequate parking.

We visited for lunch on a Wednesday afternoon. There was one other occupied table when we arrived. A pleasant young waitress greeted us and handed us menus and allowed us our choice of table.

Then, she stood expectantly - tapping her pen against her order pad - while we decided what we wanted to eat. We ordered a couple of beers in order to give us some time to look at the menu out from under the impatient scrutiny of the waitress. 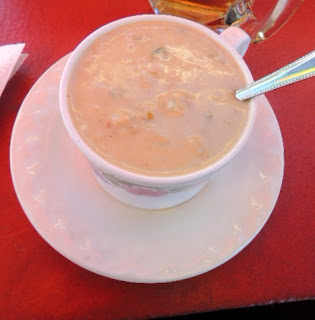 Perry's, as mentioned above, is searching for an identity, for some magic formula  that will appeal to customers. The menu offers fish and chips plates prepared with either dorado or tilapia, fish tacos and a daily fish lunch special that includes chowder, one piece of fried fish, French fries, onion rings and coleslaw. Also on the menu are hamburgers, chili burgers, salad and a variety of pizzas.

I took a friend who had tasted the pizza and declared it the best in the area. There are many reviews that corroborate his statement, along with customers who nominated Perry's for an award in 2015 for best pizza.

This afternoon we ordered the daily fish special and the bacon-bacon cheeseburger. 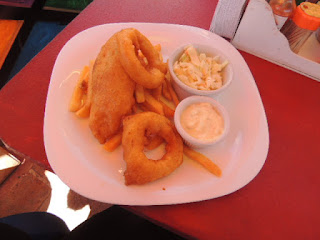 My first choice had been fish and chips, made with the dorado. However, the waitress informed me that there was no dorado that day, only tilapia. This was the first disappointment of the afternoon.

There are only two different fish on the menu. A restaurant that advertises itself as a fish and chips shop ought to have the fish available that is advertised on the menu - or at least a decent substitute. I changed my order to the fish special made with tilapia.

My meal began with clam chowder. The base was thick and flavorful, but I never did find any clams in the soup. The potatoes, though, were quite plentiful, but they were not thoroughly cooked. Rather they were hard, little chunks. I suspect this dish is a doctored version of a pre-packaged soup and not made in house.  Clam chowder is an easy dish to prepare and ought to be made fresh, from scratch, every day. 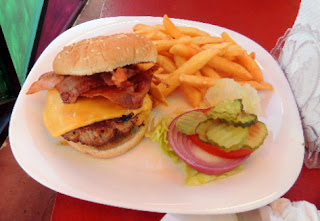 The fish and chips looked delicious, crisp brown batter fried fish served on a generous portion of French fries and accompanied by two onion rings and coleslaw. The fries were crisp, fried perfectly and served hot. I could not taste the grease, which means it was clean and heated to the correct temperature - something a lot of local restaurants have a hard time doing.

The fish was another story and the most disappointing feature of the meal. The batter was, indeed, crisp on the outside, but the inside was doughy and undercooked instead of shatteringly crisp as I expected. What had happened?

The coleslaw was also a disappointment. The tiny cup of slaw consisted of carelessly cut hunks of cabbage and carrots, completely without seasoning, with almost no dressing. Shred the cabbage and carrots, Perry, and make a seasoned dressing in which to marinate the vegetables. 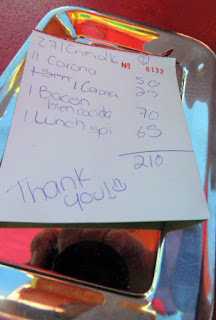 On the other hand, there were a few pleasant surprises. My friend said that the bacon cheeseburger he ordered was probably the best he had eaten since moving to the Lake Chapala area. The burger was large, cooked perfectly and piled with bacon. The plate was served with fries and a side of fresh vegetables.

Perry's serves the usual soft drinks and iced tea but also offers a nice selection of beers, including craft beers, and wine. Dessert is also available.

Perry's prices are very reasonable. They are open seven days a week and now serve breakfast, as well as lunch and dinner. Service is fast and friendly. Our entire bill for two meals and three beers was $210mx - about $12USD. We rarely eat this much food for this little money at other restaurants in the area.

Perry's is well known for their fish and chips so I was surprised at the disappointing quality of the fish special. I think the problem may have originated with a novice cook in the kitchen that afternoon. I am going to assume that this poor representation of their fish and chips plate was an anomaly. Perry should drop the tilapia from the menu and stick with mahi-mahi, even if an adjustment has to be made in the price. The better quality of the fish would make it worth the extra cost.

Go to Perry's for an excellent burger and the best pizza in town and skip the fish and chips.

Perry's biggest mistake is trying to be all things to all people. The Pareto Principle states that 80% of the effects (profits) come from 20% of the effort. Perry should take this to heart and refine his business to concentrate on those menu items that bring in the most satisfied customers and greatest profit.

Breakfast at a fish and chips and pizza shop? Why? This is an area that already has several popular breakfast restaurants. Perry's should pick an identity - just one - then concentrate on being the best they can be.
Posted by Bonnie G at 9:36 AM 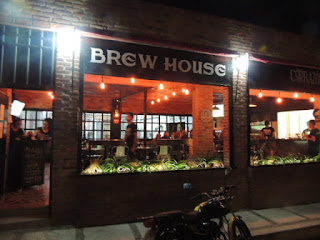 I live at Lake Chapala and enjoy traveling and trying out the many great restaurants in the area. This guide showcases the restaurants that I can personally recommend and includes pictures and information about the prices you can expect. I have dined at all of these restaurants so these are my own experiences. If you think I have missed a really great restaurant, then please let me know and I will visit and write a review. Thank you for visiting Lake Chapala Restaurant Guide.
tastetravelandtoast@gmail.com